“I love a sunburnt country,
A land of sweeping plains,
Of ragged mountain ranges,
Of droughts and flooding rains.
I love her far horizons,
I love her jewel-sea,
Her beauty and her terror
The wide brown land for me!”

Dust hung motionless in the air like early morning mist and for a time silence reigned. Sunlight filtered through the leaves of towering grey-green gums and glittered off the gravel. A muffled growl could be heard in the distance, getting progressively louder. A helicopter hummed above like a hunter hot on the heels of his prey. 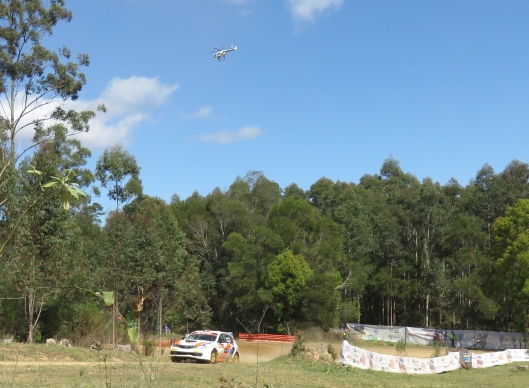 Rally cars are not tame. While watching Formula One cars race in Melbourne it reminded me of tropical parrots –exquisite and gaudy – swooping along the black tarmac. The high fences surrounding the track had the appearance of a cage. Rally cars are more like escaped lions – unfettered, growling and dangerous.

The helicopter continued its chase and the rumble increased. A shrill whistle blasted the warning to quickly take cover or run the risk of injury…or death. With a blur of colour and a cacophony of sound the car materialised from over the crest. Sliding sideways it spat out gravel from beneath its wheels, barely under control. Then in a split second it was gone. All that was left was the dust, hanging silently and drifting slowly to the ground. 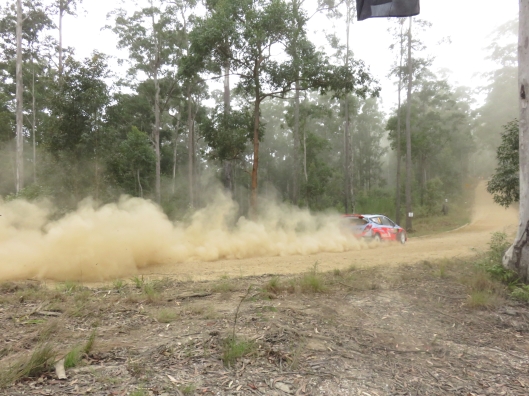 No shortage of dust!

It is hard to imagine a form of motorsport more different to Formula One. No qualifying or pole position. No wheel to wheel combat between racers. No purpose built circuits with seemingly infinite runoff. Instead the cars and drivers are faced with narrow tracks which, in Australia, are covered in deep and dusty gravel. Trees, stumps, potholes, and rocks threaten the cars from every side. There are crests which fling the cars airborne and deep ruts filled with water to traverse. It is just the driver and the clock…ticking away the seconds, or tenths of seconds, which separate the competitors. With no opponent times or splits they have to drive as fast as they are able…or as fast as they deem safe…or as fast as their tyres will allow.

Unsurprisingly even Rally is tyre limited – though not artificially like Formula One. There are hard tyres and soft tyres – which can then be used in any combination desired. They can even carry spares in the boot, though of course the weight of the tyres has to be offset with their estimated degree of usefulness. The soft tyres give more grip but they don’t last as long. The hard tyres last longer but don’t heat up as quickly. Sound familiar? And just like the olden days in Formula One they can use two of each if they’re not sure which way to go. In Australia the gravel was abrasive and the softs were wearing quickly. Drivers had to take it easy if they were to last the four stages before the next service. But the hard tyres didn’t grip as well. The wrong choice could lose you a lot of time very quickly. 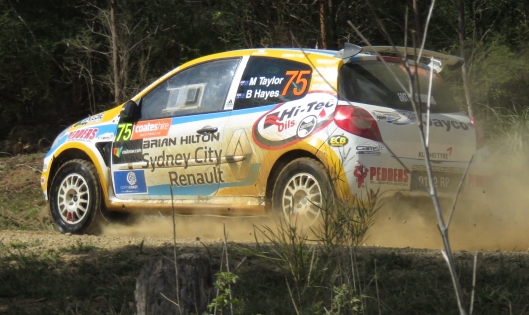 Of course we mustn’t forget the co-driver – without whom the pilot would be struggling to demonstrate his superb car handling abilities. Kimi Raikkonen may have testily told his racing engineer to be quiet, he knew what he was doing and Lewis Hamilton may moan when his engineer has the gall to give advice when he’s halfway through a corner but a rally driver has his co-driver talking him through every twist and turn and warning him of every rock and roadside hazard. Co-driver Mikka Antilla’s young son thinks that his father’s job is merely to sit in the car and read a book, but without perfect pace notes and unambiguous instructions a rally driver will never be a race, or even a stage, winner.

Imagine what Formula One would be like if the current championship leader was required to start from the back of the grid. Now that would add to the excitement! In World Rally the championship leader is first off the block for the first two days of competition. Now this may sound like a desirable thing but the reality is usually the opposite. In Australia it meant that double world champion Sebastian Ogier was given the job of “sweeping the road”. While this isn’t a menial as sweeping the garage it still gave Ogier plenty to complain about at the end of the day. The first car on the road begins the task of ridding the racing line of gravel and as the cars proceed down the racing order the grip progressively improves. The local favourite, New Zealander Hayden Paddon, won several stages as going ninth on the road he could take advantage of the forerunners clearing the racing line for him. It’s not until the last day that the order is reversed and the race leaders now get track advantage to go along with their superior machinery and more extensive experience. 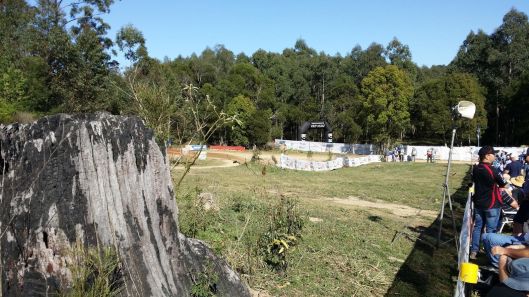 Watching a rally is a few split seconds of excitement followed by multiple minutes of leisure checking the WRC website to discover the intervals between the drivers when they finally get to the end of the stage. It is more like having a picnic deep in the Australian bush, having to deal with the usual nasties of dust, flies, spiders, fire ants, mosquitoes and snakes (though thankfully we didn’t see any of the latter) with the added diversion of the occasional car blasting past to add more dust to the sandwiches. Notice that I didn’t use the word boredom…I would describe it more as relaxing. If you are prepared and carry in camping chairs and a picnic lunch, sunscreen and bug spray, it is like going camping. You sit and chat and eat and watch the wild animals…or maybe I should say the wild cars.

The highlight of the weekend would have to be the Service Park…a place totally unimaginable to the regular punter in Formula One where only film stars and big wigs get to within a meter of the vehicles in question. Anyone can wander through the Service Park and we took the opportunity on Saturday night as the wild beasts were being herded in one by one from the recently finished night stage. The cars had started five minutes apart due to hanging dust severely affecting the visibility and they trickled in gradually, engines grumbling about the pedestrian pace, as they languidly found their way home. 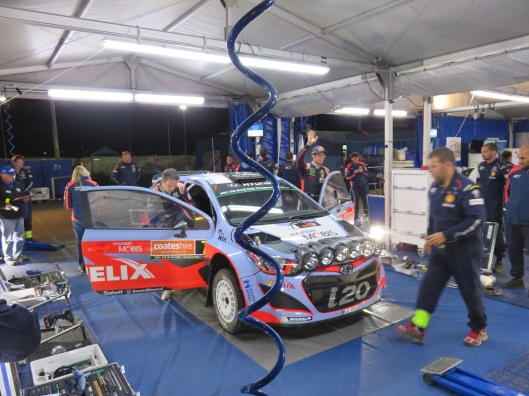 Thierry Neuville emerged from his car and waved to the waiting throng surrounding his service area before heading off to debrief with his race engineer. With only 45 minutes to prepare the car the five mechanics worked with clockwork precision to strip down and reassemble the car. It was then driven, reluctantly and complaining all the way, to be locked up until the next day when it would once again be released from its cage and allowed to run wild and free through the countryside. 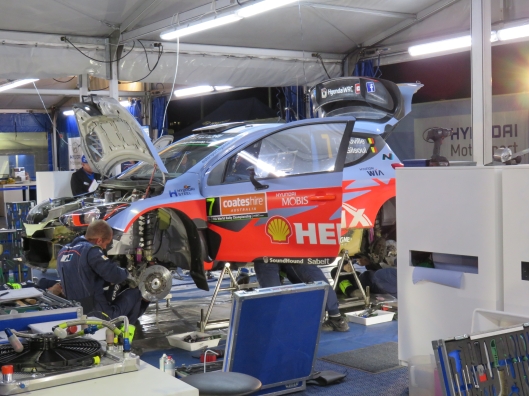 Rally driving can’t hope to compete with the excitement of the high speed wheel to wheel action that we encounter in Formula One. What it does give us is a glimpse back into the past…when things were simpler and less controlled. A time when Formula One cars competed on narrow, obstacle ridden circuits. A time when spectators could stand meters from the track, the only thing stopping them getting closer being their sense of self-preservation. A time when anyone could wander into the paddock and observe the drivers, the cars, and the mechanics at their work. There isn’t much to gain from longing for the olden days, but it was nice to catch a small glimpse of what it just might have been like.