~John Steinbeck – Of Mice and Men~

History is by and large silent and still. It is read in books and examined in pictures. Archaeologists dig and sift through dirt looking for clues about people and their lives from centuries ago. Castle and cathedral stones will never disclose their secrets of ages past.

I have visited the Beaulieu National Motor Museum and been amazed at the beauty and technology of the cars, but silence was still pervading. The cars seemed mute, no longer alive but mere skeletons of what they had been previously in their racing lives. 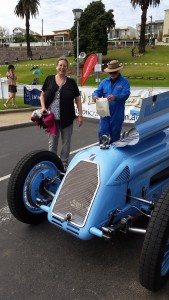 In contrast to this was the spectacle of a 1926 Talbot Grand Prix car which took pride of place at the 2014 Geelong Revival. It was not only stunning to look at, but we were also able to watch and hear it hurtle at speed down the ¼ mile track where it set a time of 16.1 seconds, not much different to what our modern family car is able to achieve.

Sunbeam-Talbot-Darracq (STD Motors) was an Anglo-French motor company that in 1926 was attempting to do a Mercedes. There was to be a change in regulations with engine size being reduced (yet again) to 1.5 litres in an endeavour to curtail the speed of the cars, and STD Motors were attempting to outdo the opposition by revamping their chassis and engine design. Italian designers Vincenzo Bertarione and Walter Becchia had departed Fiat in 1922 for employment at STD Motors. Their new Grand Prix car was assembled in Paris as a Talbot-Darracq.

For the first time it was no longer mandatory to have a mechanic ride with the car which left more options for innovation. The result was a beautifully streamlined car with a tilted engine which in turn allowed the driveshaft to travel to the rear wheels along the left side of the driver. As the driveshaft no longer had to pass underneath the driver, he could now sit lower in the chassis, which significantly lowered the overall height of the whole vehicle. Befitting the theme of low and sleek was a distinctive sloping front radiator.

It had a straight eight engine which had been block welded for additional strength and utilised forced induction through a supercharger. It was built like a Swiss watch, involving 200 roller bearings to minimize internal friction, and could put out 160 bhp at an, astounding for the time, 7000 revs.

The Talbot was launched at the inaugural British Grand Prix, the fourth of five championship rounds for the 1926 Grand Prix season. Their three cars were all decked in British Racing Green in honour of Brooklands being Sunbeam’s home race and were piloted by British driver Henry Segrave, and French drivers Albert Divo and Jules Moriceau. They were up against the might of three cutting-edge Delages whose first race had been three weeks before at San Sebastian Grand Prix, but no-one had a trouble free run.

Albert Divo and Henry Segrave started in a spectacular fashion and initially led the race, with Delage driver Robert Benoist hot on their heels in third. Unfortunately mechanical problems started besetting Talbot early in the race. Jules Moriceau’s race was over on the first lap when his front axle broke coming off the banked section of the track. The pace of Divo’s car deteriorated prematurely and he pitted on lap seven to replace his spark plugs but despite this he continued to struggle, dropping down through the field. Segrave led until he pitted for fresh rear tyres but unfortunately his car then began to belch flames, finally catching fire in the pits resulting in his retirement. Divo managed to keep his car moving and nearing the end was up to third due to retirements in front of him until his supercharger exploded on lap 83 (out of 110), which finally terminated his race.

The Delages were not having an uncomplicated race either as their cars had become “mobile ovens” due to a major design fault with their exhaust situated too close to the cockpit resulting in the floor of the cockpit becoming progressively hotter during the race. This wasn’t just a minor inconvenience – the drivers were actually at risk of severe burns to their feet. During pit stops they would jump out of the car and stand in water to try to cool their burning feet. It was a battle over who would quit first – the man or the machine. 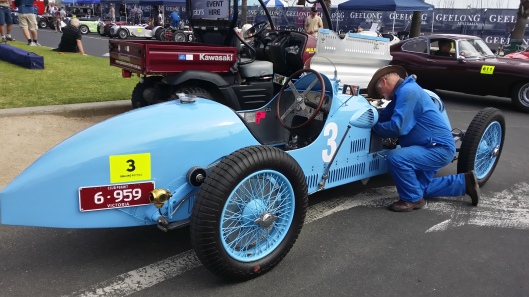 Louis Wagner’s Delage engine succumbed on lap six and later in the race he took over Robert Sénéchal’s car when his feet became too scorched to persevere. When Robert Benoist blistering feet caused him to quit, team owner Louis Delage had a car that was still running but no-one willing to drive it. He was fortunate to have Andre Dubonnet (WW1 flying ace, bobsledder at the 1920 Olympics, and occasional racing car driver) volunteer to pilot it, even though he had never driven the car before. Wearing a lounge suit he jumped into the car, to attempt to get it (and his soon to be fiery feet) to the finish.

Only three of the nine cars that started finished the race. The replacement Delage drivers managed to endure the roasting of their feet and Wagner won the race with ring-in driver Dubonnet managing third. Local driver Malcolm Campbell (of speed record fame) delivered a crowd pleasing second place driving his Bugatti 39A. (At the time neither Segrave or Campbell was the current land speed record holder, John Godfrey Parry-Thomas had broken it in April 1926 after besting Malcom Campbell’s time, who had broken Henry Segrave’s time that was set a month before that. Parry-Thomas’s record lasted almost a year until Campbell broke it again in April, 1927.)

Delage took their cars back to France to re-design their exhaust system and didn’t contest any more races in 1926. Bugatti was the dominant car during the 1926 season, winning three of the five championship rounds. Talbot did achieve first and second with Segrave and Divo at the Junior Car Club 200 race at Brooklands and took out all three podium positions at the non-championship race at Montlhéry, France. In 1927 Delage would dominate as Talbot had run out of money to finance their racing excursions and the only major race they attended was the French Grand Prix where they finished fourth behind the three Delage’s. All three Talbot’s were then sold to Emilio Materassi who used them to form the first privateer racing team, Scuderia Materassi, which then became the inspiration behind Enzo Ferrari’s decision to start his own racing team.