“You can only become truly accomplished at something you love. Don’t make money your goal. Instead pursue the things you love doing and then do them so well that people can’t take their eyes off of you.”

Triumph in Formula One is invariably reliant on multiple interlocking pieces, all falling into the right place at the right time. It demands a creative designer, cutting edge technology, a swift engine, reliable machinery, a driver able to push the car to its limits but not to breaking (or crashing!) point, and possibly most importantly, money…a lot of money. It also requires having all the stars align at exactly the same time…i.e. luck! Alta had the first three, at least sometimes, but unfortunately, three out of six isn’t enough for ultimate success in Formula One.

The 1950 British Grand Prix was the inaugural race of the new Formula One World Championship. Sitting near the back of the grid were two local lads driving Alta’s, the first British single-seater to be built after the cessation of World War Two. Even in those now distant times factory teams had the brains and more importantly the capital to outspend and outpace their opposition that may have had passion and intellect but little in the way of funds to back them up. 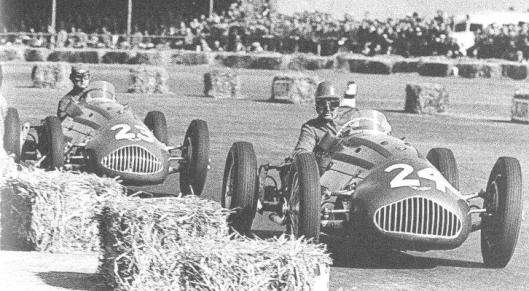 The Alta was the brainchild of brilliant British engineer Geoffrey Taylor. Taylor had constructed his first car in his father’s stables in 1928 at the age of 25. It was a road-going sports car which he christened an Alta. In 1931 he formed the Alta Car and Engineering Company which specialised in making handmade racing cars to order. Prior to World War Two, he built twelve cars which were known for their speed, but unfortunately this was not combined with reliability. He proceeded to spend most of his company’s profits funding his own racing, using his original prototype car in sprints and speed trials, continually upgrading it with all his latest developments.

During World War Two Alta’s engineering capabilities were consigned to the war effort, but as soon as the war was over Taylor began collecting the materials needed for constructing the new design he had been developing. Due to the post-war supply shortages it took three years to assemble and over the next couple of years he made three cars, all of which he sold privately.

Taylor was a cut above the majority of the private manufacturers in that he designed and manufactured the complete car: not only the chassis, suspension and coachwork but the engine as well! Even in 1950, this degree of individual autonomy was rare in the building of a Formula One car – privateers were already a dying breed succumbing to the might of the major car manufacturers, multiple departments and immense monetary backing. Taylor redesigned chassis to be more aerodynamic and further refined the independent suspension. He used a tubular chassis to lower the overall weight but unfortunately reliability continued to be a problem. 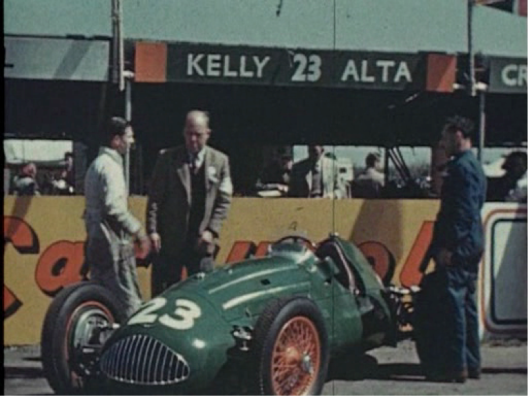 Irishman Joe Kelly bought one of Taylor’s cars which he used to compete extensively around Ireland. Kelly was a keen amateur who funded his car racing endeavours with the proceeds from his car dealership (at one stage having the prestigious Irish Ferrari dealership rights). The high point of his racing career was third place in the 1952 Ulster Trophy at Dundrod in which he beat a Ferrari and a Talbot.

Kelly raced at both the 1950 and 1951 British Grand Prix but though he finished them both he was unfortunately unclassified due to not completing 90% of the race distance. The Alta GP didn’t have much success in Formula One, competing in only four races. Their best-placed finish was when Geoffrey Crossley managed to come ninth at the 1950 Belgium Grand Prix. Taylor and his customers never had enough financial resources to continue to develop the car, and his cars were never shown to their potential as they were only being driven by amateurs.

The Taylor designed and built Alta engine did far better. He was able to sell them to the HWM and Connaught teams and their high point would be when Tony Brooks gave Britain its first Grand Prix victory for over 30 years when he beat the works Maserati team at the non-championship Syracuse Grand Prix of 1955, driving his Connaught with a 1.5 Litre Straight 4 Alta engine.  When Connaught pulled out of Formula One racing in 1959 it was also the end of the road for Alta engines…except for brief excursions at historic events…